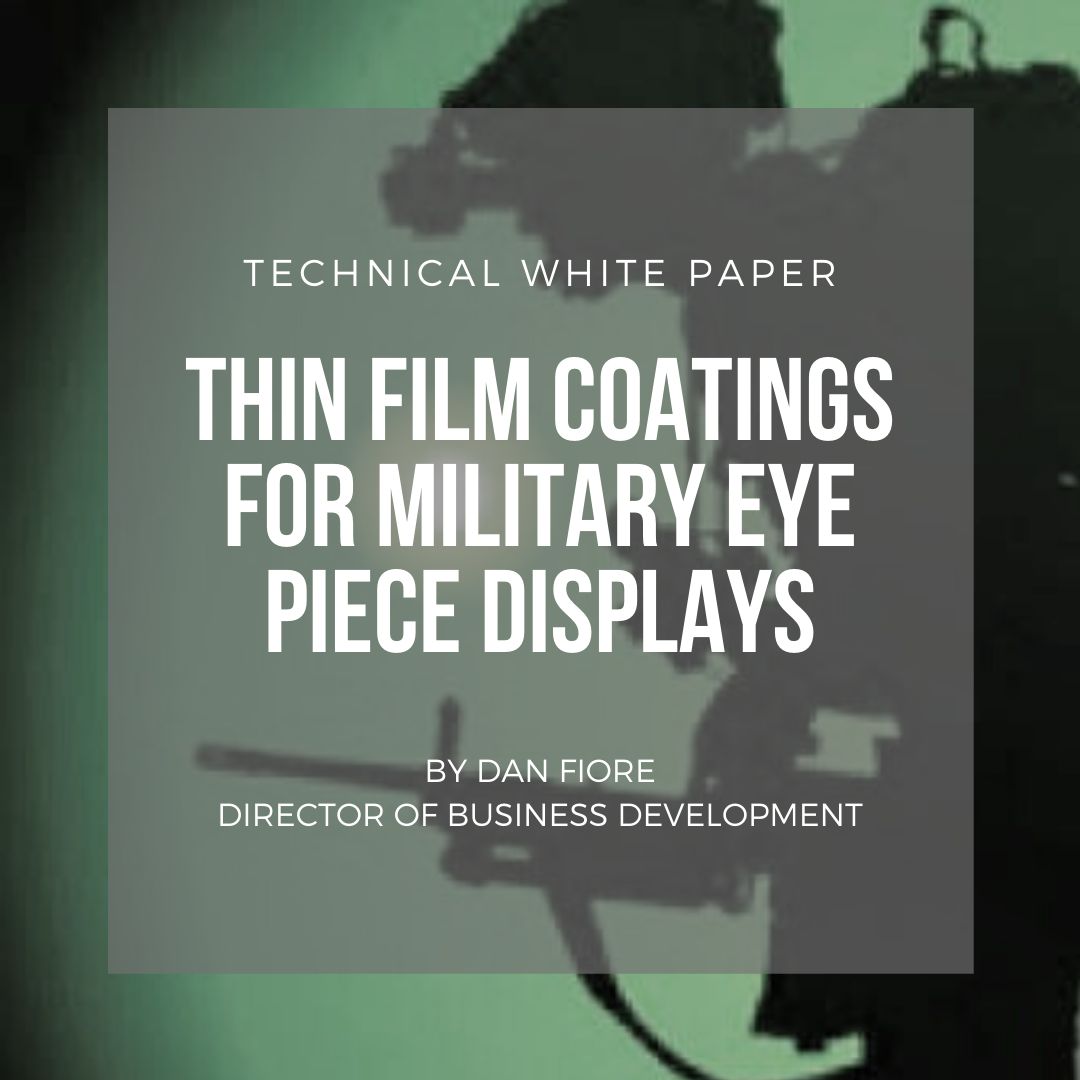 Today’s head-mounted eyepiece displays have to be tough enough to stand up to the harsh environments found on the battlefield. A customer of North American Coating Laboratories (NACL) was looking to supply the military with a remote eyepiece that could be mounted to a variety of mission-critical systems, such as visors, glasses and electronic sights. Giving our troops a remote visual display from their weapon would allow them to see around corners unexposed, therefore keeping them safer and increasing their mission awareness. Symbols on the display helped them determine between friendly and hostile assets. The customer also wanted the ability to wire this remote eyepiece to either a day or night vision riflescope. The flexibility this optic afforded our troops allowed for optimized situational awareness in the most critical of situations.

The challenge for NACL was to help make a head-mounted remote eyepiece display rugged enough to meet the demands of the military on an optical material that is soft and susceptible to severe damage through even delicate handling. The unit needed to be mounted to the user’s head via a pair of field glasses or a visor, so the weight of the device was of major concern. Bulky metal and glass optics increase user fatigue, which is not acceptable in real-world battle situations. This challenge was met by providing the lens optics in a lightweight polymer material. Although the polymer material addressed the weight concerns, a new challenge arose, which was how to ensure that a soft piece of optical plastic could endure all the harsh environments our troops see on a daily basis.

NACL met this challenge with a dip and vacuum applied coating solution. By using a combination of technologies, NACL addressed the durability concerns of its customer, while also maintaining the critical optical performance of the unit.

The first technology NACL used was a dip-applied thermally cured polysiloxane hardcoating. This optically matched hardcoating offers superior chemical and abrasion resistance while maintaining the highest levels of optical clarity. NACL worked in conjunction with the customer’s engineering staff to guarantee smooth and conformal coatings that gave the optic a robust yet smooth finish. The polysiloxane coating was used to seal the entire unit and help endure exposure to extreme environment and humidity cycling, while also resisting sandstorms, and harsh cleansers used in the field to remove contaminants from the display surface.

In addition to the polysiloxane hardcoating used by NACL, a series of vacuum deposited coatings were applied to the optical device to help process the displayed image with the clearest and most crisp display image quality. The remote eyepiece was tasked with functioning in both day and night light settings. This optical challenge meant that NACL would need to optimize their coatings for multiple lighting environments. Among the vacuum applied thin-film coatings deployed by NACL was a ruggedized aluminum coating, a high-efficiency anti-reflective coating, as well as a partially transmissive mirror coating that allowed for real-world vision while also reflecting displayed images critical to the mission at hand.

The combination of NACL’s dip and vacuum applied coatings endured one of the most extensive testing sequences performed on a polymer optic. Among these was military grade adhesion, temperature cycling, thermal shock, salt-fog exposure, severe abrasion, sand, wind weathering, and fungus exposure. Numerous tests were performed in a continuous loop one after the other, which confirmed that even a test weathered item would still perform at or above the necessary standards. NACL’s coating solutions were not only well received by the military. These optical devices would outfit front-line and special ops soldiers in some of the most critical missions they faced. The safety the remote eyepiece afforded our troops was invaluable to mission success and the reduction of casualties.