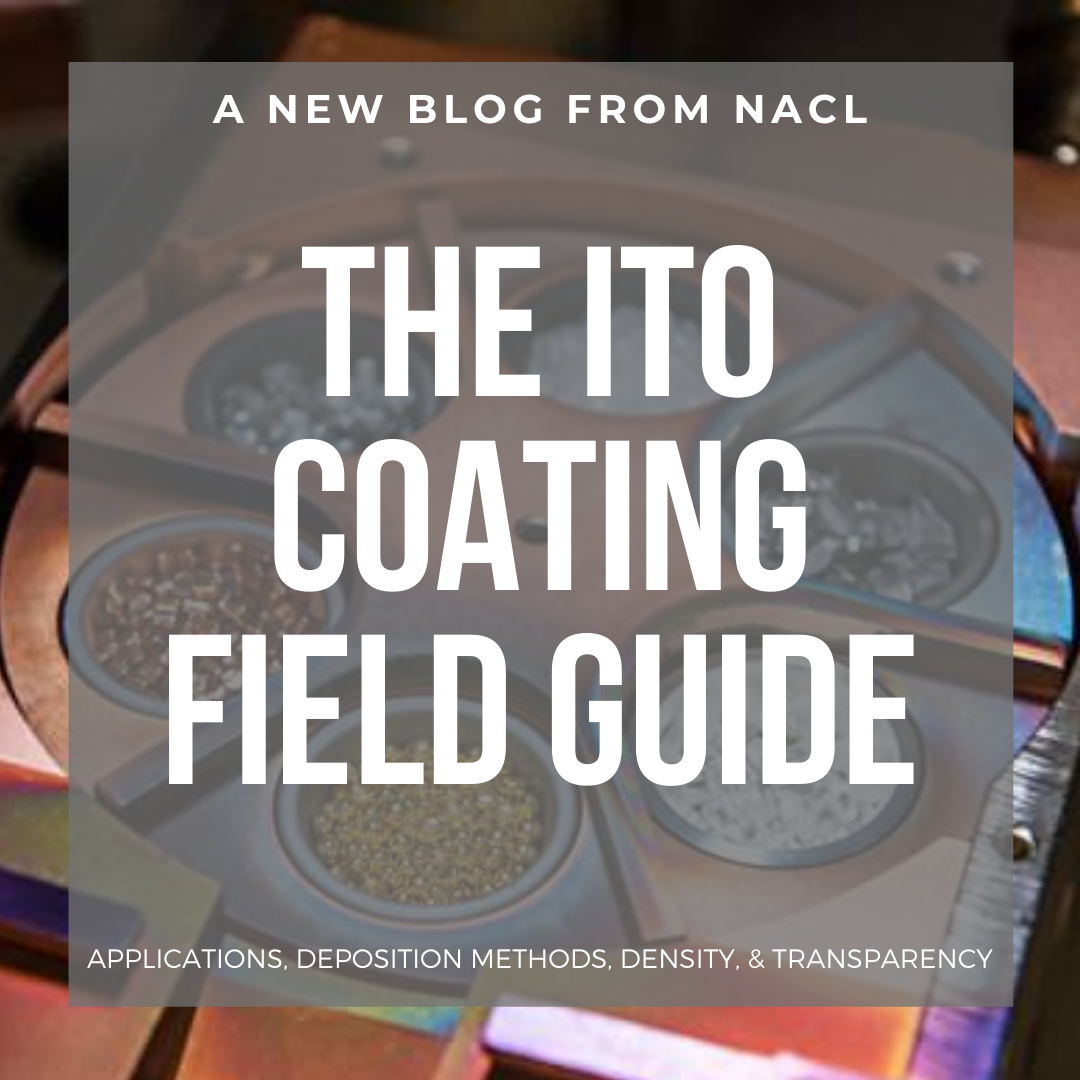 Indium tin oxide is a transparent conducting oxide composed of indium, tin, and oxygen that can applied to optical and non-optical substrates such as glass, polymers, films, and crystalline surfaces. ITO is the industry standard for transparent conductive films as it is robust, has good sheet resistance range and respectable UV-Visible and Near IR transmission which allows for good flexibility with multiple applications. Other members of the transparent conductive oxide family are IZO (Indium Zinc Oxide), and AZO (Aluminum Zinc Oxide).

Applications and Uses for ITO Coating

Optical manufacturers and display industry companies use ITO in a variety of applications including electromagnetic shielding, electromagnetic interference filters, radio frequency interference filters, display windows, LCD fabrication, touch panels, CRTs, HUDs and finally for electrostatic discharge (ESD). Any application that could benefit from placing an electrical charge across a clear surface could potentially use an ITO coating. This makes ITO very appealing for those in the defense and aerospace industries as their applications typically call for their displays and control systems to have their electromagnetic and radio frequencies shielded or made “stealth” from radar systems.

The Density of ITO Films

ITO coatings can vary widely in their densities and thicknesses. Most of the variance is due to the applications they are being used for. Thicker more dense films will yield a lower sheet resistance and are typically used on electromagnetic and radio frequency interference filters (EMI/RFI). The low sheet resistance also allows for a warming current to be sent to the glass for heater applications.

Because ITO is a clear material it can be “stacked” into a film with other dielectric materials to create a conductive anti-reflective coating. Other methods can help make ITO more suitable for a high transmission application. One of the most popular methods of lowering the surface reflectance and increasing the light transmission of ITO is a process called “Index Matching”. Index matching is a process where ITO which is a high index material is deposited on to the substrate and is then layered with middle and lower index materials to reduce the overall index of the ITO base layer closer to that of air’s refractive index which is 1.0. The challenge when producing an index matched film is that many of the dielectric materials that are placed above the ITO base layer are electrically insulative, so there needs to be a predetermined section or landing on the substrate where exposed ITO will be left after index matching so that a direct connection can be made to the conductive film.

When deposited correctly and masked properly ITO coatings can be highly effective in so many different applications. Because Indium is a rare more expensive metal other transparent conductive film processes have started to gain favor. Among the most popular is Carbon nanotubes (CNTs) which have attracted attention because of their materials properties, including a high elastic modulus, a high tensile strength, and a high conductivity. Other alternatives are nanowires or metal meshes which can be deposited on rigid substrates and conduct a good electrical charge.