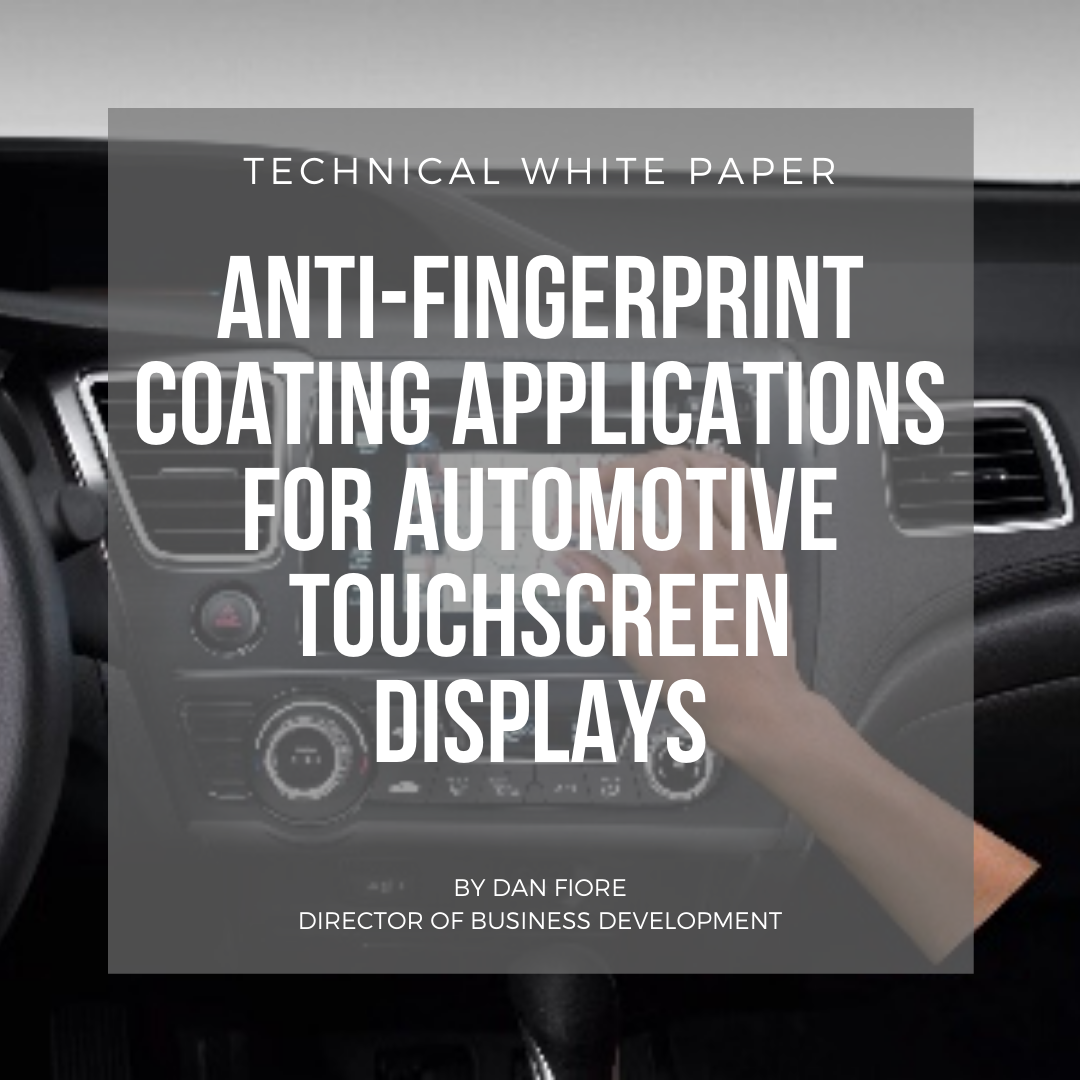 North American Coating Laboratories provides vacuum applied hydrophobic and oleophobic coatings to automotive display manufacturers. These coatings can be deposited on both plastic and glass based displays and help reduce the appearance of fingerprint oils on touch and nontouch based HMI’s. In many cases, such vacuum-applied coatings improve the optical quality of displays and reduce driver distraction by improving the visual acuity of the display through drastic reduction of fingerprint oils. This presentation will focus on the full spectrum of thin-film coatings that are currently being deployed to automotive displays in order to combat smudging and fingerprints on automotive display panels.

With the recent boom in touch-based automotive human machine interfaces (HMI’s) and displays within the past 5 years a need has arisen to improve the ability of said HMI display substrates to resist fingerprinting from users. This need is two-fold as fingerprints not only cloud the user’s view of the display weakening the efficacy of the information being delivered, but also hinder the clarity of the display making distraction free viewing of the display less likely. To combat this issue manufacturers have turned to the optics world for a solution originally pioneered in the ophthalmic lens world. The solution at present time is in the form of a fluorocarbon based thin-film coating referred to as Oleophobic. Oleophobic literally means “fear of oil” and refers to the physical property of a molecule that is repelled from oil. The most common oleophobic substance is water, however for evaporative coating technologies fluorocarbons are deposited to the substrate to create a monolayer that resists common fingerprint oils. An additional benefit of evaporative oleophobic treatments is also hydrophobicity or inherent water shedding capabilities. This inherent benefit is true of all evaporative oleophobic treatments, but not necessarily inherent in all hydrophobic treatments. The key differentiator between oleophobic and hydrophobic treatments is measured through contact angle and surface energy. Oleophobic treatments routinely have a contact angle of 105-120° as measured with a goniometer, whereas hydrophobic coatings typically have a contact angle of ≤ 95°. Although no true “Fingerprint rejecting” coating exists today oleophobic treatments are the closest solution currently available. Despite the fact that these coatings do not “reject” fingerprints they do force the oils in the user’s finger prints to bead for easier cleaning, and because the fingerprint does not stay fully intact due to oils beading on contact the appearance of the fingerprints is much less noticeable on the display. Additionally because the fingerprint cannot “fuse” to the display cleaning fingerprint oils is far easier with a coating present. An inherent benefit of including an oleophobic coating on the air surface of your touch screen is also a higher resistance to abrasion based on the high contact angle of the coating essentially deflecting potential abrasives from the surface. Additionally with the ease of cleaning an oleophobic coating lends to a touch screen one could gather that the user will be rubbing the 4.2 D. Fiore Anti-fingerprint Coating Applications for Automotive Touchscreen Displays 2 surface of the touchscreen less periodically leading to a longer life-cycle of effective use.

With the appropriate vacuum deposited adhesion layer an oleophobic or anti-fingerprint coating can essentially be applied to any polymer or glass based substrate. Typically the treatment is being utilized on Polycarbonate, PMMA, and thin (≤0.5mm thick) chemically strengthened glass. Although Polycarbonate, PMMA, and glass are all typically accepted optical substrates oleophobic or anti-fingerprint coatings can also be applied to non-optical surfaces such as ABS and different decorative metal rings. This becomes especially important as the aesthetic design of displays continues to trend towards a Piano Black luster or a “dead display appearance”.

Currently oleophobic or anti-fingerprint coatings are applied through vacuum and or vapor deposition processes. Technology also exists to apply these coatings in spray form, but as of the date of publication no widely commercially available spray method is currently being utilized in North America. Vacuum deposition of oleophobic materials occurs in a vacuum pumped chamber where an energy source (typically an electron beam) vaporizes a specific dielectric material that vacuum seals to the substrates outer layer. Typical production vacuum chambers have “pockets” or crucibles of varying evaporative materials that rotate to meet the predetermined layers of a coating stack. Once the appropriate thickness of dielectric material is deposited to the substrate the pocket of dielectric material is then shut, and the oleophobic material rotates into place and is vaporized. While airborne the oleophobic evaporative material will create a permanent chemical bond with the already deposited dielectric material therefore there is never a need to “re-apply” the coating once it is in the field. When deposited oleophobic coatings will act very similar to Rain-X® on a windshield. The largest differentiator is the permanence of the oleophobic treatment as opposed to the need to re-apply a treatment such as Rain-X®. Oleophobic or anti-fingerprint coatings form what is called a mono-layer over the dielectric adhesion layer, and due to the thin-nature of the coating offer negligible affect to the optical properties of the substrate.

Many applications that require or call for finger print reducing coatings also require additional thin-film optical coatings such as anti-reflective treatments, and Indium Tin Oxide transparent conductive oxide coatings. In this application the formula is designed in such a way that the air layer of the coating is calculated into the refractive index of the coating to not hinder the optical performance of the film, but to also lend itself so that it may act as a “catch” or adhesion layer for the oleophobic materials. At the microscopic level thin-film coatings are a series of peaks and valleys that promote destructive interference of light. The mono-layer oleophobic coating essentially fills these peaks and valleys, and because it is a mono-layer in terms of thickness the spectral performance of the coating is not compromised.

Many of the touch based displays currently being deployed in vehicles are designed to have an “Apple-Centric” appearance. Essentially designers are taking cues from the popular hand held consumer electronics sector, and employing those aesthetic characteristics to center mounted HMI touch displays. This creates more than a few issues when dealing with the finger-printing issue. Most commonly noted is the higher visibility of fingerprints on high luster “piano black” screens. Because the refractive index of oil is lower than that of a lustrously finished material fingerprints appear much brighter and more pronounced than they would if they were left on a traditional clear display. Although oleophobic coatings can help combat the formation of fingerprints, they cannot eliminate their appearance due to the disparate refractive indices of oil and high gloss displays. A secondary challenge also emerges due to the mechanical position of the display within the vehicle. Most HMI touch displays are mounted in the center stack and therefore are at nonstandard angles of viewing incidence. This configuration creates issues for not only fingerprinting, but also for high reflectance off of the viewing area. When these two issues are coupled the fingerprint issue is exacerbated by increased reflectance, and the aforementioned refractive indices disparity. An additional consideration that must be addressed when deploying an oleophobic coating on a HMI touch display is that of assembly to a frame or bezel. Oleophobic coatings are typically difficult to bond to through typical assembly techniques. Because the oleophobic coating has a high surface energy numerous epoxy based bonding applications will not adhere to the substrate which creates challenges in the assembly phase. To combat this issue a physical mask can be placed on the substrate during coating deposition to shield the substrate in predefined areas from receiving coating. This essentially leaves a predefined border around the display where epoxy bonding and pressure-sensitive adhesives can be utilized. Despite their resistance to epoxy and pressure sensitive adhesives oleophobic coatings can survive a sonic welding or heat staking process without degradation to the film in the critical viewing areas.

With the increased demand for high optical performance and usability of HMI touch displays demand will continue to rise for the display manufacturer to improve upon the delivery of information in a manner that is not degraded by fingerprints and other display interferences. Leaps and bounds have been made in the delivery technology for anti-fingerprint coatings, however as the aesthetic design of displays continues to evolve so too does the need for antifingerprint technology to evolve with it. Recently glass and polymer manufacturers have been attempting to inherently add anti-fingerprint technologies to their manufacturing process be it at the drawing level with regards to glass processes, or at the resin or IMD level with regards to injection molding. Although there is no “silver bullet” so to speak for eliminating fingerprints on displays, utilization of either inherently fingerprint resistant glass or polymers and or aftermarket coatings is aiding designers and manufacturers alike as they continue to design and produce HMI touch displays for the automotive segment.

Anti-fingerprint or oleophobic coatings have become more of an integral part of displays and optical systems within automobiles. As engineers and product design teams become more familiar and educated about coating options and their characteristics, they will continue to enhance the consumer’s experience. As HMI touch displays for the automotive segment become easier and less expensive to deploy the need for clean functional display data will increase. The cleanest and most consumer friendly platform to provide this data is through displays that have the capability to resist fingerprint interference, or at the very least make fingerprints easier to remove through standard end-user cleaning methods. When engineering teams approach the design and implementation phase of these HMI touch displays it is important to ask some critical questions. Namely how will fingerprints and environmental aspects of the consumers experience are affected when a display is utilized to communicate critical information to the operator. This makes collaborative efforts between design engineers and optical technology professionals vital to the continued growth and success of automotive display technology. By developing these partnerships and fostering them from the prototype phase to mass production, all involved entities will be able to HMI touch displays that far exceed technologies currently utilized in today’s marketplace.